Within the framework of the lecture series ‘TALKS about architecture’, on 17 October the Mumbai and Amsterdam-based Dutch architect and co-founder of Site Practice Anne Geenen will speak about her projects. ArchiNed asked her four questions.

While studying at TU Delft you worked for Doshi in India. After graduating, you returned to India and worked as a partner with Case Design. And in October 2018 you started Site Practice. What makes working in India so attractive?
What fascinates me about working in India is the presence of craft and the resulting immediacy of the process of making. As an architect, you can get much closer to the process of making and constructing, so that has become part of my way of working. The design process becomes more dynamic. Instead of handing the contractor a fully elaborated detail that he has to build, you work with him to create details that are good, beautiful and relevant, and that build on existing knowledge and expertise. This calls for another attitude, a receptiveness to input and ideas from other people during the design and construction process.

In what way could your way of working – making by doing and site practice – be exported to, say, the Netherlands or Belgium?
Although we carry out a thorough study into specific construction methods, materials and cultural aspects, these themes concern a much more generic way of conscious building while paying attention to ecological and cultural issues. They are relevant everywhere. Our name refers to that, but we try not to be too dogmatic. It’s ultimately about building up relationships and trust, because that’s the only way to kindle a process of dialogue and exchange that must ultimately result in good buildings. And so the location itself doesn’t really matter much.
In India, or Asia, work is usually based on a relationship with artisans and craftsmanship that is still much more closely connected to local materials that therefore reflects the landscape (although that is changing rapidly). Industrialization and cheap transport have already blurred that relationship in Europe, for example, but that doesn’t make such connections any less relevant. We are committed to re-establishing the value of this relationship without lapsing into nostalgia but, instead, giving it a contemporary relevance.

What can Dutch architects learn from Indian building practice?
India is an extremely dynamic country, and the scale and impact of what happens there is unthinkable from a Dutch perspective. It’s also a highly inventive country, something that is visible in ‘jugaad’, for example, the word used to denote an improvised solution that deviates from normal standards. To outsiders, they often come across as pretty chaotic, but they often conceal a really simple logic that I often find highly inspiring as an architect.
Another fine example is brick production in India, a very big industry that was standardized when India was still part of the British Empire. That meant that every brick had the same dimensions. Up until then, the size of bricks depended on the composition and quality of the clay, which meant that bricks had an optimum format in each region. If the clay was of poor quality, then the bricks would be small. Good clay made bigger bricks possible. The logic of this system is quite remarkable, but standardization destroyed the relationship. I think we can learn a lot from that.

The exhibition ‘Case Design. The Craft of Collaboration’ runs at the Flanders Architecture Institute until 19 January 2020 > More information 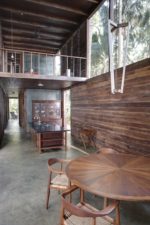 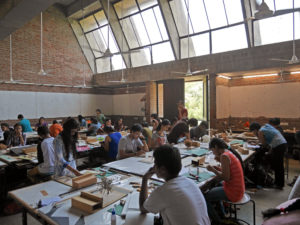 Doshi: A Life in Architecture

In a world dominated by jet-setting star-architects, glossy renderings, and PR teams, how can one situate the work of a veteran like Pritzker Prize winner Doshi? 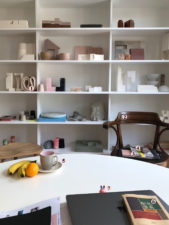 Within the framework of the lecture series ‘TALKS about architecture’, the London-based architect Mary Duggan will speak about her projects on 14 June. ArchiNed asked her five questions.