Goda Verikaite’s master thesis for INSIDE (Koninklijke Academie van Beeldende Kunsten The Hague) focuses on the phenomenon of socialist mass housing in Lithuania.

Can you briefly explain your choice of subject?
Living in The Netherlands, where everyday observable environment is constituted of perfectly matching red brick dwellings, precisely organized infrastructure, and man-made landscapes induced me to think about Lithuania – my own country. The first images that popped up in my head were sparsely scattered tiny old towns, surrounded by lush green forests and prefab block districts spreading in peripheral areas of each bigger city. A typical apartment building from the socialist era became my starting point. The more I was digging into the topic, the more I became aware how crucial this subject is until now, and not only for Lithuania, but also for the entire region of the former East Bloc. During my research, I learned how tightly urban planning, mass-produced architecture and design elements were connected to the utopian communist party promises of equality and communal living. Later on, I followed my fascination and dived into the topic of architecture and changing political systems, their confrontation as well as influence on each other.

What or who are your sources of inspiration?
My inspirations for the project varied from Reinier de Graaf’s analytical elaborations on mass-production, and platten-bau architecture mentioned in his book Four Walls and a Roof, to visionary narratives suggested by the situationist Constant Nieuwenhuys in his project New Babylon. I was driven by Constant’s proposed concept of “Homo Ludens”: a man freed by automation who finally has time to act and “play the city”. Not only theory but also vital interviews with the residents in Lithuania, which I embraced as a participatory research method on site, became my source of ideas. They enriched me with many stories, starting from nostalgic memories to brutal reality facts; from arising local initiatives to dreamy visions for future. Moreover, those interviews led me to the conclusion that the already happening official renovation of block houses was not challenging enough and there was a need for new tools to rethink the existing situation.

Can you point out the key moment in your graduation project?
It was one of those typical turbulent moments when too much information and data were gathered so I asked myself “What’s next?”  Back then I was unexpectedly recommended to read a book called Bolo’ Bolo (a fictional story written in 1983 by the anarchist beloved Swiss author Hans Widmer). It was like a fresh draught of air that provided me with completely new insights and energy. In the book Widmer created his own world based on the existing trends and personal critique on it. Furthermore, he thoroughly described how urban environment could change in a new system, starting from country scale and cities to neighbourhoods, and even housing units.  Although I did not adopt Widmer’s ideology completely, the new discoveries together with the previously gathered personal fascinations for future predictions and present phenomena led me to a speculative narrative: Lithuania after X years. It allowed me to experiment and stretch the definition of interior architecture to its limits.

Project text
My research focuses on the phenomenon of Socialist mass housing in Lithuania. This industrialized housing was the physical outcome of the Utopian promise to provide every Soviet family with its own apartment. In the 1990s Lithuania underwent radical changes in the wake of its transformation from a Soviet Socialist system into a democratic and independent state. Surrounded by proliferating shopping malls, the physical outcome of capitalism, the Soviet mass housing neighbourhoods remained unchanging relics of what had been built sixty years earlier. What is the next step in the story of these prefabricated house-machines (as Le Corbusier would call them)? By embracing speculation as a method, I have sought to explore possible and/or impossible future scenarios and ask myself, ‘What if…?’

New systems and ideologies always replace or recycle previous ones. None is perfect but every Utopia promises something new.
Just imagine Lithuania after X number of years: Massive investments in biotechnologies have led this country once again to a new system with a mysterious name: FALC (Fully Automated Luxury Communism). This system is powering the reorganization of the country and its cities.
The Dutch artist Constant Nieuwenhuys and other Utopians of the 1960s dreamt of a society freed by automation. That society has now arrived, a ludic society that can afford to live in spontaneous luxury. The question in the future will be: What does luxury mean for you? Villa Savoie? A single-family house? A vagabond life unattached to any particular place or regulations? Is time the ultimate luxury or should it be guaranteed as a basic income for everyone? What, at the end of the day, would you do if you had time?

My project adapts the theory of ‘bolos’; independent, decentralized units of people that assemble according to ‘nima’ (cultural background, common interest and time) that they share. By playing with speculations and paradoxes, I am experimenting with different concepts of luxury, work, leisure, equality and collectivity. My design suggests a series of speculative scenarios as to how, in X years from now, Žirmūnai (the first Socialist residential district in Lithuania) and blocks of flats (the purest and most adaptable of structures) can change into an experimental playground of ideas and theories.

What are you doing now?
I did a internship at an Antwerp-based research studio, Endeavour, where I had a chance to work on participatory strategies in urban planning and future scenarios for cities. Right now I work as a spatial designer at DoepelStrijkers. Meanwhile I am looking for further design collaborations, also together with my fellow classmates I am curating an experimental collective-platform for architecture and arts called No Purpose, which tries to apply the approaches of thinking by doing, ephemerality in design, and seeks for more process-orientated spatial practices.

What do you hope/want to achieve as a designer in the near and/or distant future?
My aim is to keep on being open and experimenting with different forms and mediums of architecture, whatever it would be, 1:1 spatial intervention, workshop, research-based project or speculative narrative. I aim to develop further as an individual designer as well as to look for possible collective explorations.

In collaboration with Archiprix, Archined publishes the graduation projects selected by the Dutch design schools for the Archiprix 2019. 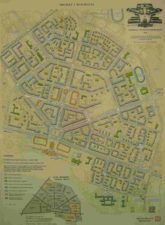