Tripping with philosophy: An evening with Timothy Morton

‘I am that idiot,’ said Timothy Morton, stepping onto the podium. We proceeded to listen to the professor of English at Rice University, Texas, for the next couple of hours.

The British philosopher, academic, activist and walking provocation delivered a blockbuster of a presentation on the politics of ecology, neo-liberalism, sexuality and gender, as well as time – yes, plainly, the concept of Time. All of these hard cookies were rendered digestible with a plenum of pop culture references and fun-spiced scientific topics, among them Morton’s own experiences in shoplifting, Star Wars, dinosaurs, micro-bacteria, Brexit, Nazis, The Muppet Show, MDMA drugs, the Pope, Karl Marx and Phil Collins.

The setting was a neon-lit neo-gothic cathedral in the centre of Eindhoven. A church-turned-cultural centre that only Dutch people think it’s normal to casually enter and listen to philosophy while consuming alcohol – (it’s called a borrel, and both lecture and drinks are included in the ticket price). Fittingly, our joyful protagonist was extravagantly attired in a Dalmatian-speckled robe and, by turns, bewildered, stunned and entertained his audience: a mix of students, academics, artists and professionals from the burgeoning design and literary scene of North Brabant.

Who is Timothy Morton again? And why should architects listen to his lectures? For one, along with Greta Thunberg and David Attenborough, Morton is making the list of high-ranking names in the fight against global warming, and chances are you’ve already come across him in the papers, on the web, on BBC radio or in a VPRO documentary. Second, his writing is strikingly catchy, and it would not be surprising if the terms he’s coined — ‘dark ecology’, ‘hyperobject’ and ‘Object-Oriented Ontology (OOO)’ — soon enter architectural jargon. And third, and most importantly, Morton’s strong emphasis on climate crisis, ecological guilt, depression, helplessness and imminent extinction has made him a mirror of our collective existential angst! Stress-filled architects get in line!

Back to Eindhoven on 30 January. Was Morton’s speech comprehensive? Not really. With a few glances around you could glimpse gaping mouths and frowned brows. Was it enjoyable? Yes! That too, and here’s the paradox! Morton’s delivery of jokey punchlines and strategically incorporated pop references would make any comedian uneasy of sudden competition. From the field of humanities and social sciences of all places! Merging philosophy and stand-up comedy apparently makes for a fun night out. The crucial question, however, is if we learned anything? And to this, we should only settle for an ‘I guess so’

Morton started out with the topics of Big Data, Homo Deus and the Anthropocene. For those not familiar with Greek, Latin and tech terms, Morton was making the familiar case of the domination of the planet by humankind wielding the unlimited force of technology. The role of philosophy was – allegedly – central to these developments. For while scientists deal with facts, numbers, and what they call ‘data’ (just a sexy rebranding of information, according to Morton), philosophers consider the possibility for things to even exist: ‘Philosophy deals with the question of “how you have a fact at all?”’

This quickly transitioned into the issue of Time – the only topic that recurred consistently throughout Morton’s speech. ‘What is Time?’ he asked himself, only to confidently declare that Time is basically a conception of rhythm, pulse and something to do with us personally since all personal identities are ‘suspended’ in Time, waiting to be validated by the social collective. Do you get it? No? Well, here are some of Morton’s references: (1) A song quote from Talking Heads: ‘I’m catching up with myself’ (Born Under Punches, from the album Remain in Light, 1980). Employed to prove that patches of Time are bound together in brief self-conscious realizations of existence. (2) A scene from one of the corniest comedies ever (Hot Shots, 1991) where actor Charlie Sheen is seen breaking the fourth wall to shout-out to his father – another actor in the scene – ‘I loved you in Wall Street!’ Which, for the record, Morton called the ‘funniest scene ever’ and brought little in terms of argumentation, but definitely something in terms of comic relief. (3) A comment on biological evolution, and how after the Big Bang, during the Great Oxygen Catastrophe of the Paleoproterozoic era (circa 2.4 billion years ago), cyanobacteria released huge amounts of oxygen into the atmosphere, leading to an ecological disaster that had the upside of paving the way for multicellular forms. Here, the conclusion was that ‘we are all fluids’ and Time is the recurrent ‘pulse’ inside all life, since the beginning. (4) Music again, in the form of a nutcase 80s music video if there ever was one: Grace Jones’s Slave to the Rhythm, from 1985. Paired with definitions of Time casually delivered by Morton such as: ‘present, meaning the past on repeat’.

This session of what seemed like pro-level shower thoughts continued with a segment that completely burnt any remaining brain cells among the audience and, at the same time, had us on the edge of our seats! The phenomenology of hyperspace in the sci-fi trifecta of Star Wars, Star Trek and Dr. Who. Yep! Ηere, Morton was saying that our understanding of ecology, earth, time and space is rendered conceivable through cultural references, and his contribution was to examine a bit closer how outer space is represented in science fiction!

Star Trek’s Enterprise gave us the representation of Warp Drive, the imaginary travel through space beyond light speeds, with an open-space working environment on its inside. Doctor Who hides another Holy Grail of real-life scientists: telekinesis. Instant space and time travel, which on the microscopic possibility that humankind will ever achieve it, is to be considered the pinnacle of imaginary future development. But most stunningly, Star Wars’s Millennium Falcon, according to Morton, is a ‘disco-like’ domestic space travelling on hyperspace, a metaphor for appropriating ‘Reaganism’ by providing a quiet, cosy space for all kinds of quirky individuals: Wookies, gender-neutral robots, ultra-feminine princesses and macho cowboys.

With so many references delivered so rapidly, Morton was bound to resonate to some extent with every individual in the audience. And his ideas, however wild, would score points of persuasion regardless of their validity, lighting up corners of your brain you didn’t know were there. I, for example, am personally willing to defend Morton’s definition of time as the almost metaphysical collective sense of rhythm, as felt in music and dancing. I have my own arguments in this: Time in Greek (χρόνος) is etymologically derived from ‘dance’ and ‘mind’ (χορός + νους). So basically, a synchronized dance of a collective mind. And that’s my contribution to wildcard arguments, Timothy Morton-style.

But in the end, what Timothy Morton was really getting into was ecological awareness: our contemporary collective consensus of our position in the world. Or, the ‘rainbow connection’ as Kermit from The Muppet Show would say, he reminded us. The whole speech came with the inseparable irony and double entendre comedy typical of British culture and the almost TV-scripted production level of American Ivy league academia. Note here that Morton was positively quotable throughout the two hours of the event, with some of his tweets (@the_eco_thought) showing up in the Q&A section, such as: ‘The End of the world is the end of the idea that humans are the only people that have a world on this planet’, or ‘Patriarchy, a key component in the deconstruction of global warming’.
These quotes, pop references and wild ideas were sprinkled here and there with the typical boredom-shrapnel of classic philosophical jargon, like ‘Kantian’ and ‘teleological’, which would occasionally add up to soup phrases of the kind: ‘…the anti-racist logic of Darwinian evolution…’ But those idioms too were paired with little jokes that would make up for the feeling of understanding practically nothing and wondering whether you really don’t get contemporary philosophy, or that you need to go back to learning English. Down the line, Morton would come over as a cool next-door philosopher with quotes such as ‘This book which I haven’t read says…’ and ‘Anyone who has taken MDMA drugs would know…’

And in sum, he was successful. His message was broadly accepted, whatever it was. A general call for equality, ecological sensibility and love. That last one was actually his concluding appeal: ‘Love somebody, anybody, for no reason at all’. And then the moderator thanked our sponsors and we proceeded towards the bar.

Retrospectively speaking, is there a lesson here for aspiring architects and designers? It seems to me that we affiliate ourselves with philosophers because we share the same feeling of entitlement to morally represent society. Well, our clients and developers might have different goals, but architects are seemingly bearing the load of social responsibility for the whole industry, and architects such as Koolhaas and Ingels are entitled to speak out about climate and social change despite their dealings with Qatar and Bolsonaro. Like philosophers, content-wise we deal with nature, the World and its problems. But service-wise we operate in the hard environment of real estate and elite academia. This double-agent work is definitely not for many, and to survive this the adoption of an eccentric persona might be quite practical and maybe even tranquilizing.

Phoebus Panigyrakis is an architect, tutor, and PhD candidate on History and Theory of Architecture.

Timothy Morton performed at the public event STRP Scenario #5 at the Paterskerk in Eindhoven on 30 January 2020. 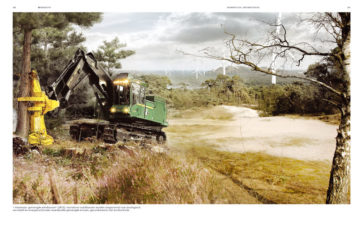 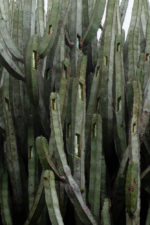 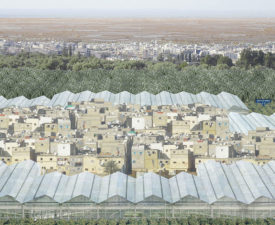