Seductive photographs of projects by well-known Dutch and Belgian design offices in what was once a poverty-stricken and introvert Albania regularly appear in the press. Is it as easy to understand the background to this phenomenon as it is to perceive the physical changes in the city?

The city of Tirana is currently experiencing an economic and building boom. It is transforming very rapidly, taking other successful European capitals as its role model. Visible signs of this development are the iconic and/or high-rise architecture and redesigned public spaces. Internationally renowned architects are entrusted with these projects, and their work attracts international attention. Nevertheless, there are critical voices whose criticism cannot easily be rejected.

Skanderbeg Square is internationally regarded as the symbol of Tirana’s redefinition as a free, European, open, walkable city. Before the Belgium office 51N4E started its restructuring in 2010, it was not in fact a square, but a chaotic traffic space. Today, it is, in contrast, highly praised and admired from an urban planning and architectural point of view. In the city centre, where the main streets converge, 51N4E has created a wide, strictly geometrical non-commercial public space framed by public buildings and a permeable green belt. The green areas serve as a buffer and link between the busy city, car traffic, the surrounding public buildings and the square. The surface rises in the centre of the square in a way that allows visitors to be ‘at par with the authoritarian architecture of the past'[1], which today accommodates museums, ministries and the opera house. This finesse in design has earned international admiration and won many awards.

Despite all that, the square is criticized by citizens of Tirana for its lack of context and usability. Many even claim to not think of the square as part of their city. Tourists are the main users today, and even for them this impression is understandable. Coming from the surrounding ‘old’ parts of the centre, one can physically feel the contrast with the new space. In fact, it feels like entering another world or as though the carpet has been pulled out from under your feet. This impression of a sudden and profound change of space, of heightened contrast and even lack of context, can be found throughout Tirana where spaces designed at different times are next to each other. The reason for the power of the contrast between the different parts can be found in the city’s history.

Tirana is a city with a turbulent history. That is true of its social and political dynamics as well as its urbanistic and architectural transformations. Even the story of how it became Albania’s capital is one of intense and sudden change. During Albania’s process of becoming an independent state, the international assembly (consisting of delegates from Albania, surrounding Albanian-inhabited territories and emigrant colonies) simply decided that Tirana would become the new capital in 1920. After 300 years of existence as a small inconspicuous town of just a few thousand inhabitants, this decision made Tirana evolve rapidly into the biggest and most important city in Albania. The expansion included big structures and big building complexes for administration and government that followed a modernist model. Tirana was transformed from an oriental city into a western one.

After the Second World War the communist regime came into power and immediately targeted unifying and adapting the city in accordance with its ideology, accepting the demolition of many historic buildings and even the old bazaar – Tirana’s historic heart.
The fall of the regime in 1991 marked the start of years of uncontrolled and unplanned growth. When artist Edi Rama became Tirana’s mayor in 2000, he started to redefine the city’s image again. He tried to modify the perception of the city through artistic interventions.[2] And he changed how the city was planned and built by organizing international competitions for big architectural projects that brought Central European architects and city planners to Tirana.

All those different phases of development made contemporary Tirana a city of contrasts. There is the city of past oppression that manifests itself in the form of prestigious modernist structures and a strict, homogenized language of architecture and public space. In contrast, the free city of the recent past seems unplanned, informal, poor, even unsafe. But it also contains colourful, playful and artistic signs of change in the political system.
The latest of Tirana’s guises reveals the rapprochement between Albania and the European Union, which extends beyond politics and democracy to include the western economic model. This is also evident in architectural and urban development.

Tirana is currently experiencing a construction boom and, interestingly enough, most of the latest developments are planned by renowned Belgian and Dutch architects such as 51N4E[3], MVRDV[4] and OMA[5]. When asked about this interesting coincidence, people from Tirana mostly answer is that it is no coincidence at all. The popular view is that it is down to Edi Rama, and more precisely, to his former role as mayor of Tirana and current occupation as prime minister, as well as his personal preferences as an artist. People say that he has a fascination for the graphical quality of Belgian and Dutch architecture, as well as an important personal relationship with some of their representatives. In addition, the success of their early projects meant that they were viewed as reliable, and so they were invited to take part in more competitions and their work was well received.

Given Albania’s official candidature for membership of the European Union, it seems natural that the city decided to enhance its links with Europe by inviting European architects to work in Tirana. On another note, welcoming European input manifests itself in a steadily rising number of skyscrapers, shopping malls and other buildings that demonstrate the triumph of capitalism. Famous examples include the TID Tower” by 51N4E (completed 2016), Toptani Shopping (completed 2005) and Downtown One (under construction), the latter two by MVRDV.
In comparison with other Balkan cities that experienced similar construction booms, built capitalism in Tirana seems to reflect more quality in design and professional finesse. Nevertheless, the lack of context and usability is a point of criticism of many of these projects, especially new high-rise apartment buildings. Many of them are financed by private investors. They offer exclusive and very high-priced condominiums or are even kept vacant to serve foreign property speculation. Other newly introduced (and privately owned) public functions – such as shopping malls, bars and restaurants – are only usable by those who are willing and able to spend money.

Considering this imbalance between planning and actual use —the lack of context and the neglect of people’s daily lives— questions arise like: Who are those architects and decision-makers planning for? Are they helping the city to change in a way that is coherent with its social system, or just developing a new market for tourism, retail and property speculation? Viewed critically, it appears that the latter is the case. Obviously, Tirana has not yet achieved compatibility between economic prosperity and respect for context and living realities. This problem is not particular to this city, however. It is an important issue in contemporary architecture and urbanism in general. 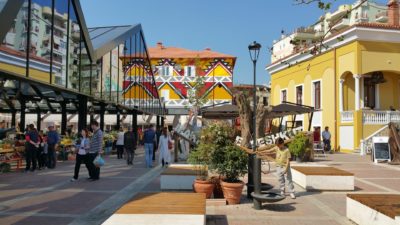 Tirana is a trending European capital and an exciting destination for various reasons. Saimir Kristo writes about what lies beneath the bright, colourful surface. 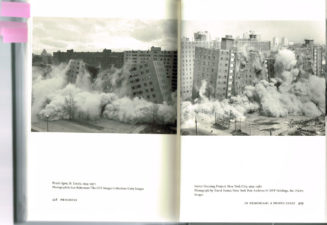 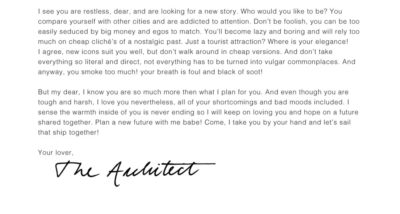 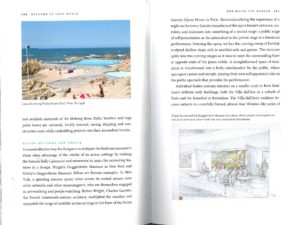 Over de impact van architectuur op ons leven: Welcome to Your World. How the Built Environment Shapes Our Lives.