Olaf Winkler shows various interventions along the Brussels canal, a rift in the city’s fabric and a test case for urban diversity. Archined Virtual Lunch Walk, join us live via Zoom.

Few people know that Brussels has a canal running right through its centre. Even fewer dare to cross it. Today, the main artery of industrial prosperity in the 19th century is primarily regarded as the border between a touristically booming downtown and the social complexity of Molenbeek. All the more reason why this very line has lately become a focal point of city planning and a test case for urban diversity with an impact on the capital as a whole. While a new overarching Canal Plan has been developed for this heterogeneous zone, it is of course interesting to look at specific projects to see how they define spatial changes and urban opportunities and how they affect the balance of social groups and cultures. How is the city dealing with gentrification at different scales and from different local perspectives? What role has been attributed to culture, industry and green zones? And what has been the impact of the ʻarchitectural answersʼ implemented up to now?

Architecture journalist Olaf Winkler takes us on another virtual live tour of architecture and public spaces. This time he leads us through a Brussels in transition, following the central stretch of the canal: from the huge, transformed Tour&Taxis site near the port to smaller architectural schemes, from inconspicuous social interventions to refurbished industrial buildings and new parks reflecting todayʼs ideas about urban space.

Olaf Winkler studied architecture in Aachen and Vienna. He has been working as a freelance architecture journalist, critic and editor for leading German architecture magazines since 1997. Olaf Winkler lives in Schwerte in Germany and has spent some of his time in Brussels since 2006. www.tailoredcity.de 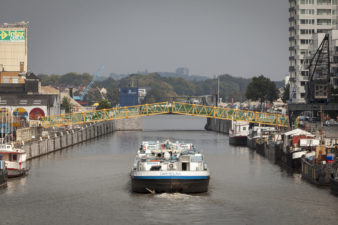