How media took over modernism. A PhD scholar’s biased retrospective

In this series of articles, PhD scholars from various universities explain their research and their way of working. What is the focus of their academic work? What question(s) do they want to answer? And what problems have they encountered? Phoebus Panigyrakis (TU Delft) is researching the content, editorial policy and impact of the magazine Architectural Record in the period 1942-1967.

‘A good PhD is a finished PhD!’ That’s the one and only rule in PhD studies. There are so many obstacles, diversions and paralyzing factors that pausing to reconsider what you do and why might get you stuck for months. Nevertheless, this is my attempt to explain what I did for the past four and a half years as a PhD researcher at TU Delft.

Personal interests
Getting an architecture degree in Greece of 2015 didn’t put me in the best place. Not only had the ongoing economic crisis brought the employment rate of starting architects practically down to zero, but it had also convinced me that architecture had lost all its social relevance. Keep in mind that while evictions became an everyday thing and homelessness soared, the only construction sector left unchallenged was the development of villas and ‘luxury’ hotels on the Greek islands. Heading off to do a PhD in Delft, I wanted to address the question of what happened to modernism? What happened to the social project of architecture: delivering a proper house to every family, cities with bright and clean streets, plenty of public space and affordable facilities for education, health care and leisure. My way of tackling this was to ask other questions. Is modernism today a style? When was it reduced to an image? Why did architects abandon ideology for lifestyle?

In my mind, this problem had something to do with media in the post-war era, where I would posit the start of our contemporary problems. Long story short, I ended up writing the history of an American architectural magazine, the Architectural Record, during the years 1942 to 1967, a period that I believe showcases architecture’s transition from late modernism to postmodernism.

Starting the PhD research
Currently in its 129th year, the Architectural Record holds a monopoly as the main medium for practicing architects in the US. Despite that, in architectural history books the Record is mainly commemorated for its early years. For its significant production of critical pieces around 1900 and a celebratory period in the 1930s when it introduced European architects like Le Corbusier, and painters like Picasso, to an American audience. But I was interested in what happened during the affluent post-war years in the US. When architects were conditioned by the consumer market and the mass medium of magazines guided architects through the rapid changes. This is when and where modernism changed from a movement to a style. And the magazines were the vehicles of that change.

Moreover, I didn’t want to limit myself to the content of the magazine, but rather to find what was going on behind its pages. For this, I needed to collect information on the hidden historical figures, the editors who ran it, their policies and agendas at the time. This meant that I had to do archival research. To go through thousands of documents of correspondence between editors, publishers and architects, which are kept in dozens of university libraries around the US. This took me roughly a year to collect and about another year to process, travelling between MIT, CCA and TU Delft.

The historical context
Making the change stark between the radical-functionalist version of modernism and its pluralistic formalism, my research starts in 1942 when American architects were forced to adopt modern design to the production needs of World War II. In a matter of days, the US architecture production turned predominantly functionalist: airports, military barracks, hospitals and military schools assigned to architects through governmental contracts. In fact, this situation continued after the war. Until 1949 and the period of re-adjustment, the US underwent a continued programme of large-scale change: cleaning up slums and building schools, mass housing projects and large infrastructural networks. But the dawn of the 1950s saw the American welfare state crumble and the consumer market rise. This is essentially what opened the door to pluralism in design and closed the door on architecture as the search for an optimum solution. With public commissions out of the way, architects returned to single-family residential design as their main service, and subjective questions of taste, comfort and delight became more important than function and affordability. The 1960s offered another phenomenon that solidified this change: the incorporation of architects in Architecture, Engineering and Construction companies (Gensler, SOM, etc.) and the complete definition of the profession’s rights, organizational bodies, services and means of operation through the establishment of institutions, guidelines and protocols. From then on, architecture as a practice was tied to the liberal economic model of the consumer market. Other significant issues that emerged in 1967, such as Aldo Rossi’s ‘Rationalism’, Peter Eisenman’s Institute of Architecture and Urban Studies, Robert Venturi’s manifesto of ‘Complexity and Contradiction’ as well as the introduction of computer-aided-design (CAD) helped to transform modernism into postmodernism. From then on, architecture became more and more formalistic and the economy more and more liberal.

Now it is interesting to see how magazines, and especially the Architectural Record, rendered these changes possible. That’s what my research is really about.

PhD research content and findings
Throughout these years, between 1942 and 1967, the Architectural Record was a quite conservative magazine. Its editors didn’t make bold statements, its content wasn’t especially literary, and neither did it feature exceptionally vivid images. This put it third in circulation amongst professional magazines of architecture, after the Architectural Forum which was highly spectacular in its use of photographs, and Progressive Architecture, which showcased exceptional drawings and technical plans to attract young professionals. Despite that, the Record was deliberately conservative because it attracted a very valuable core of practicing architects, ones whose business sense meant they did not take great risks. The reason for this strategy was that the Record wasn’t making money from subscriptions, but from selling advertisements. Clinging close to practitioners, and funded by manufacturers, the Architectural Record became the connecting agent between the industry and practice, market and architects. And, accordingly, it was particularly invested in the architects’ conformity to the ongoing changes.

During the 1940s, the Record pushed for the adoption of modernism not as a social ideal but as a financial measure. As its editor-in-chief Kenneth Stowell (1942-1949) proclaimed, modernizing was a way of profiting. His successor, Harold Dana Hauf (1949-1951), introduced a universal system of ‘graphics standards’ amongst architects and manufacturers – as head of the joint committee of the American Institute of Architects and the Producer’s Council. In the 1950s, a significant case for the erosion of modernist values was the substitution of the word ‘modern’ with the word ‘contemporary’, which the Record editors used in multiple articles as well as in special monographs, such as the 1954 Treasury of Contemporary Houses. Around that time, the Record editors supported the return of residential design as the core activity of architects. In this effort, they also emphasized that architects should design with the aim of providing ‘delight’, ‘comfort’ and ‘coziness’ rather than function and usefulness. And not what they wanted, but what the client wanted. In the same 1954 book on houses, they would proclaim:

Why should a modern house have to have a flat roof? Or a glass wall? Or an open kitchen? Why should it have to have its structure exposed? Why shouldn’t it have anything its owners really want, including a curve or two, even a Victorian curve?1

As another editor put it, in a confidential communication to colleagues, pluralism in residential design was returning because the Architectural Record salesmen practically wanted to sell more kitchen appliances to architects.2
During the 1960s, a more powerful commercialist agenda appeared in the magazine in the face of Emerson Goble, editor-in-chief from 1958 to 1967. A real estate expert, Goble told architects that a new era had begun, which he called ‘the packaged society’. In one of his flary op-eds he wrote:

Going to great lengths to prove that architectural magazines should mould architects to the market’s needs, Goble opposed his competitors’ policy of producing pieces of architectural criticism. He would say that the field of architectural journalism had to choose between sophistication and commercialism. And he would go for the latter. With sophistication he said, ‘You end up with a meeting of editors and critics happily debating as they sit on their exclusive heights’. Instead, he wanted his magazine to provide useful and applicable information. The kind that attracts advertising. In an editorial meeting in 1958 he explained to his editors:

‘The actual problem for editorial staff is to produce a medium that advertisers find attractive because they know readers find it useful. If readers spend enough time with Architectural Record, advertisers know they are thoroughly exposed to advertising. We have an obligation to set up an atmosphere conducive to the good of the advertiser.’4

More spectacularly, in the pages of the magazine, Goble left his mark with a series of articles under the unifying title ‘The Image of the architect’, which ran throughout the 1960s and argued that the architectural profession needed a makeover of its public image to expand its market. Addressing the profession’s communication problem, Goble told them to use their telephone, not their pencils, and to note down their clients’ family names and other information in order to seem friendly and active in their community. Goble’s ideas were actually developed with the help of a marketeer, Ernest Dichter, who applied psycho-analysis to architects to help them discover their ‘image’ and ‘self-image’. This initiative was even picked up by the AIA as an official educational programme for practising architects and resulted in some of the very first marketing consultancy firms for architects.
In doing so, the Architectural Record editors and publishers not only reported on and lobbied for the image of the 20th-century architect, but constructed it. Or rather, packaged it.

And I, after four years, found someone else to blame, other than myself, for not knowing how to react, what to design, and what kind of architect to be during an economic crisis.

Phoebus Panigyrakis is an architect, tutor, and PhD candidate on History and Theory of Architecture. Disclaimer: Even though I am writing about my PhD research as if it is my sole responsibility, this is not true. Instead, my supervisors, the academic community and other institutional resources have heavily conditioned my research and should be credited.
English editor: Billy Nolan 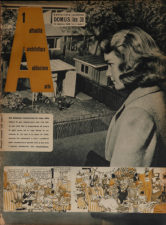 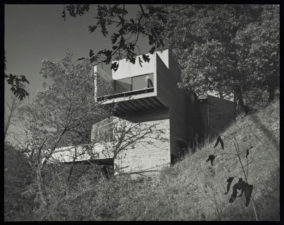 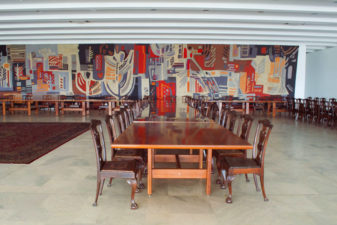 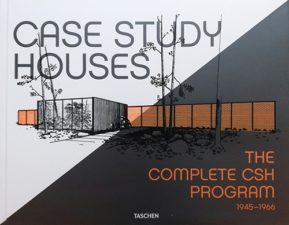