A Threshold of Evanescence for the Women of Bousbir – Archiprix 2020

The project is an intervention of two buildings and a gate along the route from the walled-off district of Bousbir Quartier Réservé in Casablanca to its external medical dispensary. With it Rebekah Tien tries to give a sense of individuality to the women living in the district.

Can you explain your choice of subject?Long before the graduation project, I developed a personal fascination in looking into the social and political structures of religious cults or religious dystopia. This fascination derived directly from my personal journey of growing up in a strict, religious and extremely sheltered family in Taiwan, and the personally significant and difficult journey of self- exploration and realisation I have experienced when I left home as a teenager. This fascination intensified when I reread The Handmaid’s Tale by Margaret Atwood. It resulted in the idea of combining this fascination with architectural research to further explore it on both personal and architectural layers. However, the chance for an opportunity to do so seemed very slim. When I started the graduation studio, a series of unfortunate events somehow let me stumble upon this red light district called Bousbir. Slowly through my research process the opportunity that I have been waiting for presented itself to me. The story of three women: a prostitute, a handmaid, and myself began to weave into a Threshold of Evanescence.

What or who are your sources of inspiration and can explain this?
I just embrace things as they reveal themselves to me along the process.

State the key moment in your graduation project.
The moment when I realise that based on the power of architects alone, despite all my good intentions and ambition of saving the women, I could never single-handedly subvert the social order. This realisation lead me to revaluate my position and respond to the situation of Bousbir through the modest tools in the discipline of architecture – Light, Wall, and Opening – in order to (re)introduce the sense of temporality and individuality to the women of Bousbir.

Project text
This project is an intervention of two buildings and a gate along the route from the walled-off district of Bousbir Quartier Réservé in Casablanca (Morocco) to its external medical dispensary. The weekly route followed by the districts female inhabitants to the mandatory STI inspection constitutes an extended threshold between the two realities of the district and the medical facility. The project challenges the roles of Light, Wall and Opening in Bousbir and works with these modest tools to introduce (or reintroduce) temporality and a sense of individuality to the women living in the district.

Bousbir Quartier Réservé (1924-1955) was a highly regulated, completely walled-off red light district. It was built to satisfy the sexual needs of European men, and was a solution to the STI problem caused by colonial prostitution during the French Protectorate in Casablanca. It was the projection of a Far Eastern fantasy, an erotic theme park. Yet, for the working women within, Bousbir was a perpetual prison, where time seemed to loop and where they were robbed of their individuality. This situation resembles that of the social order of the religious dystopia in Margaret Atwood’s The Handmaid’s Tale. In a sense, the district was Casablanca in miniature.
The notion of ‘Potemkin city’ vividly illustrates how the darkness of Bousbir was masked by a strategically built filter for men in architectural and social layers. Further readings of the nature of Bousbir and its theoretical development took the form of morphotypological investigations, together with an analysis of literary fiction.

The ever-changing quality of light, revealed in various ways through the different properties of walls, evokes a sense of temporality. The sense of individuality in a collective setting is strengthened when multiple perspectives converge through carefully placed and proportioned openings. These tools were used to develop three spatial systems with different light-wall relationships. First, there is the abstraction of the wall when strong direct light is shaped and made manifest by that wall. Second, there is the abstraction of light when walls are revealed by indirect light so that their materiality emerges. And third, there is the abstraction of wall and light when wall and indirect light work together in creating an optical illusion of an extended reality.
The three types of walls were then further developed accordingly on both theoretical and technical levels, thereby organizing the threshold between district and dispensary into a spatial sequence. As this threshold built to enable the rereading of reality disintegrates, it opens up the possibility of reconnecting with the distant memories of temporality and individuality.
Lastly, this project is also an architectural representation of my self-exploratory process. The stories of three women – a woman of Bousbir, a handmaid, and myself – become one and materialize in this Threshold of Evanescence.

What are you doing now?
I am working as a junior designer at UNStudio

What hope / do you want to achieve as a designer in the near and / or the distant future?
I don’t have a specific idea of how I would like to mould myself yet since I know this is a long profession. I am just excited to see how I can grow and what other things architecture will reveal to me. 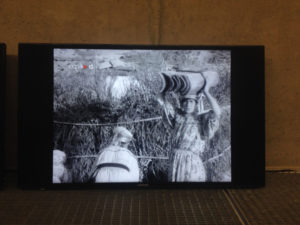 An exhibition about architecture as a means of control and repression.