Issue 105 of OASE considers the role of drawing for, and in support of, architecture as a practice. The review of a series of architectural drawings makes for essential reading not just for architecture students, but for anybody interested in architectural representation.

Within the resurgence of interest in architectural drawings and representation, as testified by numerous publications and exhibitions, the recent issue of OASE carves out an original point of view. It can be synthesized as an attempt to assess the role of drawing in architectural practice or, in other terms, the instrumentality of drawing within the work of architecture. Specified as such, the theme of OASE becomes particularly relevant for those who do not see architectural drawing either as an autonomous artefact or as the simple representation of a building, but rather as a fundamental tool in the process of making and thinking about architecture. This theme was already central to ‘Translations from Drawing to Building’, an important 1986 essay in which the British historian Robin Evans discusses the ‘transmutation that occurs between drawing and building’, imagining the potential positive capacity of drawing to impact the making of architecture. While the cases discussed in Evans’ text are limited, this issue of OASE certainly has the merit to take on board his intuition while expanding those ideas to a wider spectrum of drawings in terms of author, historical period and drawing technique. Being particularly interested in architectural drawing myself, and being confronted with questions on architectural representation on a regular basis during conversations with students, I found the issue of OASE a significant read and rich in relevant references.

Two types of essays can be found on the always beautifully designed pages of the journal: a series of short and longer essays in which the drawing work of an architect is briefly presented and discussed in relation to his/her design work; and a series of longer essays discussing the techniques of architectural drawing, especially from an historical perspective.

Among the first type of essay, authors present and discuss either with short texts a single paradigmatic drawing by architects such as Lina Bo Bardi, Livio Vacchini, Sigmund Lewerentz, James Stirling and James Gowan, and John Hejduk or, with longer texts the drawing work of figures such as John Ruskin, Heinrich Tessenow and Tony Fretton. Among the second type of contribution, a series of essays tackles the axonometry, the section, the parallel projection and the relationship between floor plan and elevation. Having read with interest the various contributions, I noticed that four issues come to the fore, which I would like to present here briefly.

The first theme, implicit in the perspective of the entire issue, is a clear answer to what I consider today to be a fundamental question in architecture in general and in architectural education specifically, namely whether there is — or should be — a relationship that ties together the drawing of architecture with its underpinning design philosophy. Reading some of the essays leads one to answer this question in the affirmative. As highlighted by Asli Çiçek in her short presentation of the drawing of the floor plan of the Losone gymnasium in Ticino by Livio Vacchini, both the use of the computer in the making of the drawing and of an extremely reduced system of notation consisting of solid surfaces and hatches, coincides with the ambition of the designer to make architectural space only with structural elements. The resulting plan, section and elevation can be seen as attempts to give spatial definition to the otherwise abstract and ‘immaterial’ structural schemes of engineers. The second example is a comparison by Jurjen Zeinstra of four different domestic perspectival views drawn by Tessenow between 1903 and 1911. Although the four drawings at first sight may resemble one another — all drawn with a black ink pen on white paper and representing a portion of a furnished room —, a progressive reduction of the representational means as well as some small alterations to the framing of the view are linked to a conceptual shifting of focus and goal in the architect’s domestic work. If the first drawing suggests the importance of the atmosphere, the simplification and reduction of the later ones reveal the emergence and importance of things such as furniture within the domestic setting and the architect’s rising interest in a certain ‘ordinariness’ of space.

The second theme from the issue is the existence of a strong relationship that links the emergence and development of certain drawing techniques to rising socio-economic concerns, as well as to a series of historical epistemological transformations. As described by Merlijn Hurx, the introduction of the combination of floor plan and elevation in a single drawing, a technique that is generally understood as an invention of the Italian artist-architects during the Renaissance, also developed in the Low Countries during the 16th century as the result of the transformation in the design and construction industry at that time. Rather than the application of tenets developed by Renaissance architects, it is the need to overcome problems related to the rising professionalization of the work of architecture, the commercialization of the construction industry and the widening separation between designer and builder that primarily supported such advances in the making of drawings of buildings, which became fundamental tools to support the exchange of ideas between patrons, designers and builders. Expanding the same line of thinking, Leonidas Koutsoumpos brings the discussion a step further, linking in his case the development of a drawing technique ­— the section — with epistemological transformations related to the understanding of the world in ancient Greece. The drawing in section of the cavea of a theatre on a fragment of an ancient vase portraying a chariot race is associated with the importance that the practice of sectioning acquired at that time. With the increased interest in rational thinking, cutting through things became a way of producing knowledge, a new method of knowing, of establishing categories and new relations between parts.

The third theme that emerges is the capacity of architectural drawing to support the mental process at the origin of any architectural imagination. Drawing can help make architecture in the mind of the architect ‘real’, as suggested by Véronique Patteeuw in her short commentary on the drawing of the brick wall of the nave in the church of St. Peter by Lewerentz. This drawing is far from the abstract conventions of the architectural detail and of the ways in which these are normally cropped and sectioned to squeeze as much information as possible onto the limited size of the paper sheet. Instead, drawing here is primarily necessary to prove to the architect himself the possibility of that brick wall, and reveal how the bricks and mortar are not simply materials, but ‘the primary components of the design itself’. The act of drawing each single brick for the entire elevation is not motivated by a quantitative reason, but the act of drawing reproduces in the mind of the architect the making of the wall, revealing a juxtaposition for Lewerentz between drawing and construction. This understanding of the practice of drawing as the making of a mental space brings us close to the widespread and fundamental practice of using drawing to build a personal imaginary where references, sources and fascinations coalesce into the space of the paper. In this regard, Mariabruna Fabrizi discusses a drawing by Lina Bo Bardi of her and Carlo Pagani’s project for a ‘Casa sul mare di Sicilia’ of 1940, in which the proposal is drawn as inserted into an imaginary landscape evocative of Sicily, punctuated by vernacular architectures, plants and vegetation, mythological figures and archaeological traces, which all become direct or indirect references to the project.

To conclude with the fourth theme, I would like to mention the last essay in the issue, written by Helen Thomas, in which the practice of architectural drawing is discussed in relation to the rigid economic constraints of an architectural office. Expanding on Marx’s notion of unproductive labour, Thomas recognizes the potential of understanding drawing as the materialization of Bataille’s idea of non-productive expenditure — a concept indicating an intellectual but non-rational state of non-productive use of energy and time. Yet, if the making of architectural drawing is recognized as a potentially unproductive practice, and this might have certainly been true in London in 1881 — the year of the drawing by George Aitchison discussed in the text — it remains questionable whether this possibility exists within the current conditions of production. When the organization of architectural labour relies more and more on specialized workforce or firms for making three-dimensional models and digitally made renderings, or for producing construction drawings often outsourced to low-wage countries, thus widening the division between designing and representing architecture, and when the drawing software has become a complex system capable of managing a wide range of building parameters, it seems difficult to believe in the possibility of drawing to exist outside the contemporary economic logic of production. In other words, given the current economic conditions of architectural production and the development of new integrated digital drawing tools, the split between drawing and designing might unfortunately only become wider.

Martino Tattara is a practicing architect and Assistant Professor of Architecture at KU Leuven, Faculty of Architecture. He is the co-founder of Dogma, an office based in Brussels.

Architecture in Perspective Conference is held every year as part of the American Society of Architectural Illustrators (ASAI) programme. This event is online only and consists of pre-recorded video interviews that are available now on the website and two days of moderated zoom sessions with workshops and live Q&A’s. Dates: Friday, 16 Oct. and Saturday, 17 Oct. 2020, 4-9 pm 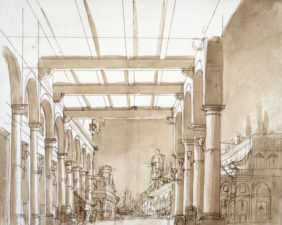 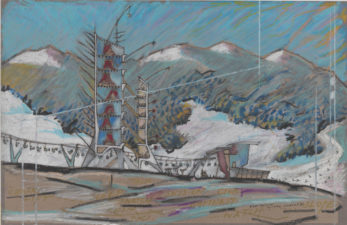