Another daring leap into the future by MVRDV. Hint: the message is in the façade

Two complementary MVRDV events took place on Saturday 6 November 2021: the inauguration of its latest project, Depot Boijmans Van Beuningen – the only publicly accessible art depot in the world – and the opening of The Living Archive of a Studio, an exhibition organized with HNI, in which the architecture office and cultural centre tell two exciting stories.

MVRDV sheds light on its creative process, exhibiting documents and tools it has used throughout its existence, while the HNI reveals how it manages the mostly digital archive of 400 projects that the design practice donated to the institute. Located on the institute’s sixth floor, the exhibition is a stone’s throw from the recently finished art depot. The timing sends a clear message: the public is invited to discover the inner workings and creative mindset of MVRDV, the playful studio that has just placed a 35-metre-tall shiny salad bowl in the heart of the city. The exhibition and archive constitute a total architectural project: the conceptual and the built side by side.

With almost 30 years of experience, the Rotterdam-based architecture studio has managed to remain relevant in the competitive construction industry despite, or maybe because of, its signature unconventional style. With projects such as the Markthal, the Depot Boijmans Van Beuningen and the early Villa VPRO, the office has established itself as a bold, fun, innovative and radical force. MVRDVHNI The Living Archive of a Studio thus offers a more than welcome insight into the secrets of creating architecture in an industry dominated by profit-driven developers and regulatory governmental forces. A living archive suggests the fundamental influence the archival documents still play in the studio’s process. Unlike frozen, sterile documentation, MVRDV’s records represent a history that actively shapes its present mindset and future ambitions.

The exhibition begins with a modest area where multiple cabinets display, per project, visual documents such as renderings, revised technical drawings, photos, sketches accompanied by an electronic tablet, some models and cardboard boxes. This material highlights incisive moments in the design development of the chosen projects: refining the façade of the Berlin Voids with a red pen on a perspective drawing, or reworking the wave-like ground floor of the Expo 2000 Netherlands Pavilion by sketching on a printed elevation. In addition, videos add oral histories: present and past collaborators of the office reminiscence about certain projects by looking through a box of documentation that rekindles memories. The piles of sketches and photos the speakers examine are unfortunately not accessible to the visitor, yet some of them peak slightly from beneath the few documents on display. If curious to learn more, the visitor might understandably try and open the tempting cardboard boxes to discover something else. Alas, the boxes are empty. A hint at the digitalization of the archive?

The main space of the exhibition is structured by statement: HUMAN, GREEN, DREAM. As is customary in the discipline, the architects use verbal cues to set their work in a desired narrative. For the HUMAN theme, a showcased project is WoZoCo, MVRDV’s first built housing complex where site constraints and the office’s user-centric preoccupations offered the opportunity for an innovative design solution: massive cantilevered extrusions that frame the surrounding landscape. For the GREEN theme, the office brings into the dialogue environmental and social systems. KM3 unabashedly declares MVRDV’s vertiginous concerns with various scales: from the continental level of Pig City to the neighbourhood scale of New Orleans. Lastly, DREAM, an otherwise intimate endeavour, is made collective by MVRDV’s ambition to inspire and provoke users. This is reflected in FARMAX, a body of research conducted in academia under Winy Maas, which visualizes density data in a way that can be shared with non-architects. The message is clear: it is not only about dreaming big, but also about dreaming together.

Developed as such, the exhibition is mostly flattering, which can easily turn self-celebratory. However, in an invigorating coup, HNI takes the wheel and introduces critical segments in the visitor’s journey. In the ‘Happiness Filter’ section, one can see how the office modifies architectural renderings to create visualizations that are inviting for the clients, the media, and ultimately, the public. ‘Lush green trees, a bright blue sky, and fashionable people’ is the key to winning architectural competitions, the accompanying panel explains. The section ‘Behind the Cover’ comprises piles of folders with the multiple steps undertaken by the architects throughout the VPRO design: planimetric analysis, context analysis, development of multiple scenarios based on surface, form and function, spatial explorations through sketched perspectives, reference photos, volumetric diagrams, all in the order they were created. Accompanied by a video discussing the difficulties created by the financial crisis of 2008, this small section seems to be the rawest representation of the processes and struggles MVRDV has gone through.

Other stimulating parts of the exhibition include the computers where the visitor can interact with experimental software such as THE OPTIMIXER and THE REGIONMAKER. Developed by cTrough, the OPTIMIXER is a design tool that allows the user/designer to manipulate a set of parameters such as pollution, panorama and housing distribution, and quantities such as industry, housing and forest, and thus produce corresponding spatial configurations. The visitor is free to modify the parameters that will update the visualizations generated by the software. Additionally, REGIONMAKER can generate different scenarios of land use related to population growth. Both tools reveal the importance of experimentation and fast computation in the creative process of MVRDV. Not only do these allow the studio to generate a multitude of informed scenarios quickly but they also provide a deeper understanding of the relationship between certain parameters and synergies. By playing with the software the visitor is granted access to the same level of understanding. With the OPTIMIXER in the first room and the REGIONMAKER in the central area, the path is cleared for the exclusively digital section coming next.

The exhibition ends with a thrilling room where several innovative digital tools created by designers allow visitors to interact with the digitalized archive of MVRDV. For example, MVRDV – NEXT (the computing unit of the office) has created the cloud that facilitates browsing through the office’s digital documentation using data such as project number or date. In addition, images may also be filtered according to type (sketches, renderings, …) and typology (pixels, objects,…). The tag for the images may be updated by visitors, allowing the artificial network to become more precise. Another tool is Zonamata, created by the artist and writer Alice Bucknell, where an AI generates a game world trained on MVRDV’s discourse and architectural theory. Here the player can interact with what seems a post-apocalyptic world, filled with built and unbuilt projects by MVRDV. Experimental and speculative, this section of the exhibition raises questions about future ways of displaying and interacting with archives. But most importantly, it underlies the potential of the ‘living’ archive to become a design-generating algorithm. The design method is standardized and transformed into a digital tool.

In the end, the exhibition is a chronology of design processes that MVRDV has applied during its three decades of practice, punctuated by segments where specific working methodologies are assessed and turned into design tools. Starting from sketching bold moves with a red pen on technical drawings, continuing with colourful models, ‘happy’ architectural renderings and academic research on various scales, and ending with algorithmically speculated architecture based on earlier ideas. The meaning of the ‘living’ archive is revealed. MVRDVHNI offers us the Ouroboros, the ancient serpent eating its tail. As expected, this serpent is not conventional, each cycle providing a bolder, more innovative version. By using its archive and completely embracing its identity, the architectural office optimizes and creates its own MVRDV design thinking tools.

When analysing the Depot Boijmans Van Beuningen and the exhibition side by side, one recognizes the obvious MVRDV brand: bold results and seemingly bold processes. Ultimately, one wonders if this MVRDV knowledge is applicable for other architects. Is MVRDV teaching us a lesson bigger than itself? I believe that it does manage to deliver more. It is not, however, the heavily filtered access to its archive that elevates the exhibition’s larger meaning, nor the otherwise admirable critical perspectives offered by HNI. What positions the exhibition close to the core of architectural discourse today is the platform it offers for architectural thinking: a six-floor-high pedestal to be more precise. The profession’s most valuable asset, as taught by the visionary Rem Koolhaas and translated in OMA’s AMO decades ago, is exhibited here face to face with built architecture.

Let us grab that red pen and edit the ‘Living Archive’ to make the statement clear and shrug off MVRDV’s concern for non-architects’ approval. Cross a big red X on the raisin models, the shiny perspectives and clean plans, remove the happiness filter, zoom in on the research, the drafts, the underlying preoccupations of the studio with understanding parameters, relationships and improving complex, unstructured situations, and there you have it: pure design thinking. I guess it will be some time before architects wholeheartedly embrace the awkwardness, complexity and almost manic character of design processes. Until then, the exhibition (open through 4 September 2022) provide an exciting place for both the general public and architects, since its incisive study of the past and visionary hints of the future are sure to make everybody wonder. If you do go, please, don’t forget to glance out the window. The boldest message is right there, hidden in the mirroring facade.

Lola Elisa Căuneac is currently in her final year of the Master of Architecture at TU/e and she works as a research assistant for Heijmans. She received her Bachelor’s degree from the Ecole Nationale Superieure d’Architecture de Versailles and previously worked for the architectural firm ECDM, in Paris. Lola is now writing her graduation thesis with a focus on architectural thinking and its connection with visual representation. 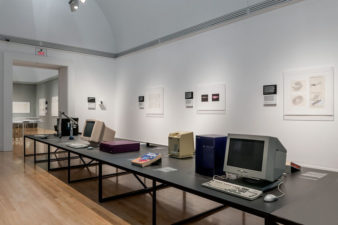 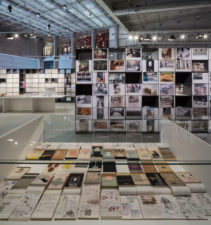 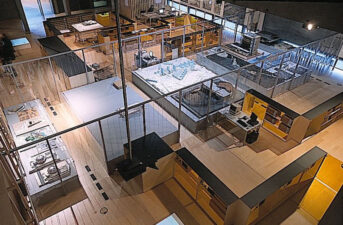