The Persistence of Questioning

As part of The Persistence of Questioning, critical reflections for the future: ‘What is architecture?’, Lara Schrijver argues that Science fiction in particular can help architecture to consider unforeseen consequences of design decisions. We thoroughly need to recognize how on the one hand the environment and society are connected, and how on the other hand the future remains difficult to predict.

At its core, architecture is a hopeful gesture; it envisions the potential of a place and strives to improve the conditions of human habitation. At the same time, it aims to facilitate the life within, providing what is needed for a range of individual and collective experiences. These two perspectives – the drive to improve and the aim to facilitate – are the foundation of architecture and its self-conception. As such, design oscillates between hubris and serviceability.

Architecture thus encompasses two concurrent visions, one that maintains the world as it is, and one that foreshadows another, possible form of coexistence. Imagining possible worlds is what architecture shares with science fiction and speculative fiction. Overconfidence sets in when the architect believes that society can be changed directly through architecture. In the manifestoes of modernism, the scale tipped towards hubris, with architects taking on increasingly large-scale problems, and aiming to construct new societies through their projects. As sci-fi author Paul Scheerbart wrote in 1914 for the Werkbund exhibition in Cologne: “If we wish to raise our culture to a higher level, we are forced for better or for worse to transform our architecture.” The later disappointment in modernism shows that grand visions cannot (or should not) always be built (as for example the desolate high-rise estates of Paris and Toulouse). Yet sometimes grand visions are needed in design – as long as modesty accompanies them, or the realization that not everything can be shaped.

This sense of ‘building worlds’ is not unique to architecture and science fiction. A variety of creative fields, among them as theatre, film, literature and game design, also provide alternative worlds for their audiences. Yet through the presence of the built environment in everyday life, architecture makes its mark on society, while simultaneously expressing the values of that society. This is not a direct, unmediated connection: how a building is experienced is a complex interplay of (individual) perception and (collective) culture. Buildings often remain longer than the societies for which they were built (as in the former Eastern Bloc). Moreover, important changes can sometimes come from unexpected sources – and may even be smaller, more modest, or less consequential than the grandiose plans of history would suggest. In science fiction – both written and filmed – the environment and the narrative are intimately connected. Here, everyday experience seems to fade into the background, and the friction between intention and result provides a rich foundation for reflection on social conditions. These stories (particularly since the 1970s) often begin from an envisioned post-apocalyptic wreckage, inevitably founded in our present. Keeping the narrative and its environment coherent is a way of magnifying the questions, of shedding the everyday distractions that architecture facilitates. Showing a future in which our current constructions have fallen into ruin or caused extreme ecological destruction, these stories provide a counterpoint to the architectural schemes that project a controlled, improved future through their spatial organization.

Histories of architecture show many of the societal hopes and dreams that were woven into conceptions of the world-as-it-may-be. Tony Garnier, for example, claimed that no prisons were needed in his Cité Industrielle because there would be no need for crime in his rational and socialist city. In architecture, the far-reaching social and spatial consequences of such ambitions often remain underexposed. In contrast, science fiction is free of the practical constraints of realization, and can also show the dangers and failures of those worlds yet-to-come. The coherence of the forms and forces of their worlds, and the values and behaviours they encourage, are part of the provocative strengths of these stories. At the same time, architects have equally imagined complete and far-reaching projects – Tony Garnier’s Industrial City (1917), Gyorgy Krutikhov’s Flying City (1928), Buckminster Fuller’s dome over Manhattan (1960) – which showed a hope for the future as much as it showed an architectural idea.

Today, one striking theme in contemporary science fiction is the questioning of the natural laws that constrain reality as we know it. This is a theme that has some roots in the later years of the 20th century. Since the 1970s, some of the narratives have begun to voice a discomfort with the convictions of scientific knowledge, and with the notion that progress should be pursued no matter the consequences. While many of these narratives still rely on human resilience to overcome challenges – there is always a group that survives thanks to human (and technological) ingenuity – the destruction in these stories is typically related to the unforeseen consequences of human behaviour. They are increasingly grappling with the conditions of what is now designated as the Anthropocene, and some stories seem to suggest that we should prepare for the absolutely unforeseeable.

For example, in James B. Tiptree’s 1978 novel Up the Walls of the World, two separate storylines, one with an alien species and one about humans experimenting with telepathic communication, are gradually brought together. The alien narrative serves to speculate on a completely different approach to gender roles: in this species, the size and strength of males is seen as making them particularly suited to child-rearing, while the smaller and more versatile females are the food gatherers and scouts. This simple inversion of a basic assumption of the 20th century, that size and strength are needed for hunting rather than protecting the young, uses the Darwinian idea of ‘fitness to purpose’ to question our own societal assumptions.

In Up the Walls of the World, Tiptree (pseudonym of Alice B. Sheldon), uses the alien narrative to create characters outside the realm of typical narratives and to tell a story that holds a mirror up to our society. The aliens communicate in light-waves (not words), live in electromagnetic field storms, and have few physical features we can relate to as humans. Yet they communicate, and connect with their human counterparts. Their world is ephemeral – or at least not physical. This is played out against the human world, with a research department on a military base as backdrop – the ultimate in drab, bureaucratic and institutional architecture. Nothing here is spectacular, but everything is carefully considered.

Tiptree’s story juxtaposes a completely different world with our own; the differences not only evoke a sense of wonder but also question our own conventions and assumptions. In so doing, the story also suggests that modern society has brought not only progress and solid scientific knowledge, but also new challenges.

The well-being of individuals in a highly technological and urban society, the shortcomings of rationality in the face of a complex ecosystem, and a heightened awareness of environmental concerns are central to the stories of the past 50 years and determine the structure of their environments. More recent narratives go even further, transforming the relationship between humans and the environment with a profound transformation of materiality itself, building on cybernetic systems, nanotechnologies and accelerated evolution. These stories are set against the background of a continuing destabilization of how we understand ‘humanity’, ‘technology’ and ‘nature’.

For example, one story that goes against the laws of nature is Jeff Vandermeer’s Southern Reach trilogy, of which Annihilation (2014) became a Netflix feature-length film. In this story, a mysterious area called the ‘shimmer’ is the object of an investigative expedition. People who go into this area sometimes fail to return. Those who do return are no longer themselves. The shimmer is a zone full of strange events, and as the story unfolds it turns out that there have been many previous expeditions. The area seems to be expanding, and it becomes clear that the environment is causing a kind of anomaly in which human, animal and plant life mix to create new, hybrid life forms. Human-trees, bear-humans, and plant-fishes are emerging here, and time also flows differently. The series as a whole questions the very limits of human agency, and it addresses the consequences of conceiving of human life as separate from other life. As such, it also questions how modern thinking came to neglect the constraints of the world it occupies. The trilogy reflects on the failures of modern society, which is also increasingly tangible in buildings that alienate people and damage the environment. Vandermeer explores this narrative even further in his 2017 novel Borne, imagining a world where technology, life and DNA become blended, where species are equal parts natural and artificial.

These types of speculations have a role in making sense of the world as it is, and conceiving the world as it may become; they are provocative reflections on the collateral effects of collective actions. Science fiction in particular can help architecture to consider unforeseen consequences of design decisions, to thoroughly recognize how on the one hand the environment and society are connected, and how on the other hand the future remains difficult to predict. Thanks to the many worlds that have already been conceived – in architecture and in science fiction – design can relate to the world we want to build. Science fiction magnifies existing conditions to speculate on other potential worlds. Architecture similarly seeks to envision possible worlds, while it is also bound by the existing context. These two aspects of building worlds are not mutually exclusive but, rather, inform each other. The complementary perspectives show how our existing and imagined realities influence one another, thereby shaping the worlds we actually build. It is precisely by incorporating these radical visions (of thriving urban ecosystems, or a variety of different residential cultures) that change can be initiated. Some level of pragmatism is necessary to realize a building, but imagination is equally needed to shape the future.

Lara Schrijver holds degrees in architecture from Princeton University and TU Delft. She received her Ph.D from Eindhoven University and she is a professor of architecture theory at the University of Antwerp, Faculty of Design Sciences. She is editor of the KNOB Bulletin and writes regularly on the architectural cultures of the 20th and 21st centuries. 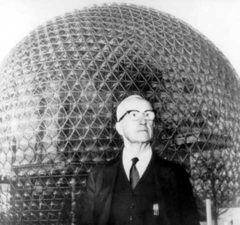 The world of Buckminster Fuller 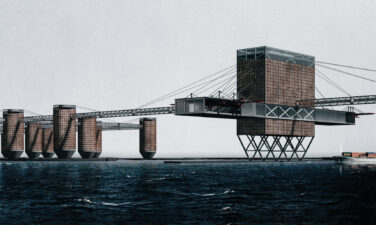 The Zone of Disassembly – Archiprix 2020

The graduation project by Martin Kolev derives from the question of territory and formulates a spatial intervention which has the potential to unveil the North Sea hidden e-flows. 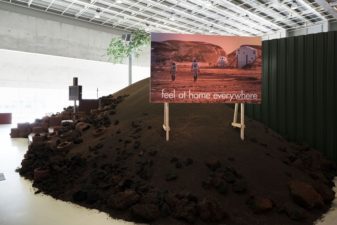 How are Mars/Planet B, techno-agriculture or biomaterials inspiring us about the future? 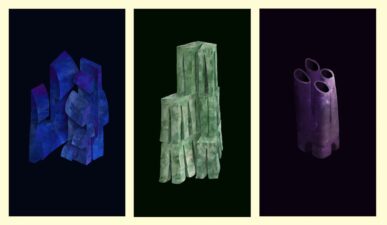