Tessa Koenig Gimeno (TU Delft) transformed the Plaza Italia in Santiago de Chile into a square for demonstrations and gatherings. Her graduation project is an inimitable example of how public space can facilitate cultural resistance.

Protest has become a ubiquitous part of urban life as a result of the conditions that command processes of urbanisation. This project concerns itself with the advocation for spatial agency in cities by understanding how public space can contribute a form of cultural resistance within turbulent political and social contexts. The thesis aims to be understood as a manifesto; an architectural provocation that is committed to the democratic potentials of urban spaces. The research focused on the 2019 Santiago protests in Chile, a relevant precedent that demonstrates how ‘deliberative democracies’ of 21st Century Latin America are being challenged under current economic and political climates. The project considers the phenomena of protest as a manifestation of collective conscience translated into the physical occupation and de-powering of an urban territory, specifically the transformation of Plaza Italia to Plaza Dignidad in Santiago.

Throughout the previous 50 years, Latin American cities have experienced radical rates of urbanisation. A concrete plateau situated within the Andes Mountains, Santiago’s urban growth has been galvanised by the implementation of a neoliberal economic model under the dictatorial regime of Augusto Pinochet in the 1970s. It appears only the San Ramon tectonic fault line is capable of limiting the subordination of the rural to the urban, exposing the exploitative nature binding capitalism and urbanisation as a critical anchor of political and class struggle. The production of a protest culture has become a pivotal part of public life, where protest is not so much an abnormality, but a continuous urban condition in flux. A capacity for change commences with the awareness of the societal production of space, and the right to command and disrupt the urban structure: to decolonise the city.

In an effort to understand the capacity of public space to engage with processes of decolonisation, the research references fields such as sociology, political theory, and material culture to ensure a comprehensive analysis of the place. An in-depth theoretical understanding of the historical, cultural and political contexts supported observational work carried out during the protests in Santiago. This provided the framework for further post-situ ethnographic research on the spatial processes of decolonisation. In order to illustrate the act of decolonisation of Plaza Italia to Plaza Dignidad, a graphical documentation of the city’s quotidian conditions alongside the destruction after protest took inspiration from methods and techniques used in archaeological drawing. The traces of protest thus delineated potential sites of intervention and provided a graphical representation of the physical, material and spatial conditions of the place.

During the months of protest, monuments throughout the country were repeatedly damaged and dismantled in a collective effort to reject the acceptance and permanence of stone statues that gave testament to a manipulated history. From monuments to ruins, the remains of colonial, oligarchical and patriarchal figures littered the streets, pronouncing the continent’s stolen identities. Within the urban fabric, the imposition of Monuments represent loci of power and conflict, where the iconographic glorification can be experienced as a violent intrusion on the public and collective sphere. Thus the re-purposing of monuments becomes the significant genesis of the project. By removing the existing statues from their plinths, power is dislocated and the status of the monument is redefined. An iconoclastic inventory documents these artefacts, their material, their dimensions, and their histories. The extensive catalogue archives the data of the defaced monuments and their respective plinths, in order to imagine how these artefacts could be re-appropriated and represented within public space in a sensitive and democratic manner.

In relation to the city, the brief imagines embedded scales that resist urban conditions and provide moments of spatial agency. The protest route is understood as an urban territory composed of three significant elements: the presidential palace, the street and the plaza. As the city’s main site for mass social manifestation, Plaza Dignidad forms a focal point within this symbolic and political landscape, through its convergence of principle roads, the river Mapocho and the Andes mountains. Translated into a programme, the project forms 3 spatial infrastructures: a Cultural Itinerary along the protest route incorporating the constellation of remaining plinths within the identified urban territory; Plaza Dignidad a civic infrastructure for urban ecology, civic engagement and public mobility; and a Public Archive facilitating a civic programme that aims to re-define the monument through the documentation and conservation of defaced statues. The urban strategy speculates a collective collaboration with actors within the city. Alongside the Chilean Council of National Monuments, the existing cultural and educational institutions that populate the avenue Alameda take responsibility to intervene with the surrounding empty pedestals according to their specific institutional programme, creating a constellation of didactic moments that puncture the public space.

The project focuses on the design of Plaza Dignidad as a monumental void that resists the dense urban fabric contained between two existing linear infrastructures: the L1 Metro line and the Mapocho River. Through a cultural, historical and political itinerary along the protest route, the spatial experience of a continuous public space seeks to be pedagogical and symbolic, by focusing the citizen perspective to engage with the provocative idea of ​​the horizon as a device to dismantle urban spatial hierarchies and power structures. The proposal to materialise Plaza Dignidad as a new horizon in the city encouraged the design approach to focus on the articulation of the territory and the ground. Expressing the plaza as a plinth, it is designed as a civic stage for daily rituals and social manifestation. The communication of the soil was extended to the material and construction processes. Led by an investigation into the existing soil conditions and the sedimentation layers that revealed the geological formation of the site, the main construction methodology sought the use of earthen construction, referring to vernacular traditions and proposing unconventional uses of the construction of rammed earth underground.

As an idea that tries to recover an urban territory to its people and its environment, the project brings together Plaza Dignidad, the Mapocho Riverbank and an underground public archive into a connected programme. The river promenade and peripheral gardens populate the urban site with native flora that once grew in abundance throughout the Santiago valley. In a symbolic gesture that relocates statues underground and replaces them with stone caryatids, these abstracted geological sculptures redefine the monument. The concept of ​​the ‘natural monument’ transcends the entire project across various scales and extends to the materiality of the square, which celebrates the richness and beauty of Chile’s geological diversity. The status of the political monument is subverted and redefined through ecology by empowering place, culture and memory.

More information about the project 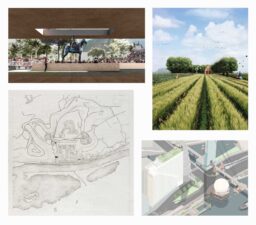