10 Tales and a Ghost

When it comes to the built environment, lasting change is often born of vision, determination, and a clear plan of action. However, if we have learned anything from the past, post-WWII Modernism in particular, we know that urban transformation does not always result in positive developments. Grand gestures claiming sustainable innovation have been critically scrutinized ever since. A better move forward is perhaps a more dispersed constellation of small- to middle-scale testing grounds.

Steps towards an ecological transition in the field of architecture are increasingly advancing through collective endeavours capable of matching the right know-how with the right technology in the right places and for the right reasons. What they often lack is a space to share and discuss their failures and achievements, a learning environment in which knowledge and skills can connect to build a shared culture and new collaborations. Prefigurations, An Exhibition on Architecture and Transitions wants to offer such an environment. It assembles exemplary architecture and landscape projects with the aim to reveal glimpses of what our surroundings could look like in five to ten years. It is also a space for workshops and debates, ideal for educational activities and not only for spatial designers, especially since the exhibition’s rich but complex contents are most interesting when having a conversation about it.

The exhibition was curated by Hanne Mangelschots (AWB) and produced by Architecture Workroom Brussels (AWB) within the framework of The Great Transformation 2020–2030. This initiative is an “independent learning environment, incubator and public programme to accelerate place-based system change” steered by a pool of experts comprising economists, sociologists, designers, policymakers… They set up a collective agenda in which they formulated a common vision for ten types of ‘Future Places’ to achieve in the next decade. Meanwhile, this framework serves as a basis to launch thematic public programmes and cultural productions. Among these is the exhibition Prefigurations, which opened last June in an office building formerly used as bank administration and call-centre at Boulevard Pacheco 34 in the city of Brussels.

AWB moved in this six-storey building less than a year ago together with a few other cultural organizations, artists, architects, and an architecture school research studio. The building was vacant, except for a medical centre for persons deprived of healthcare temporarily occupying the fifth floor. With the property owners, the new occupants negotiated a temporary lease for three years, after which the building is likely to be fully reconditioned. Despite the building’s central location, the surroundings appear rather bleak. This neighbourhood stands in stark contrast to the transformation the exhibition itself advocates. In fact, it may be a perfect ground zero to debut an ecological transition – or rather, a recycling initiative – that builds on the rubble of past failures.

The construction of this large boulevard resulted from Brussels’s North-South underground rail infrastructure, which opened in 1952 and contributed to the city’s infamous ‘bruxellisation’ – an uncontrolled modernization process led by real estate developers who showed disregard for the city’s inhabitants. This radical transformation split the neighbourhood in two.
Uphill is the state’s oversized Cité Administrative and its public garden erected on top of a car park. At street level on Boulevard Pacheco, all you see are the entrances to the latter facing the former royal mint workshop, an office building (in which the exhibition takes place), an underground train station, and another administrative complex. The area’s glory days – if there were any – are long gone. Today, its original functions are mostly defunct.
Several buildings are waiting for refurbishment, the mineral garden on the parking slope is partially abandoned and hollowed out by an imposing construction site, pedestrian routes are locked off, and police officers come as reinforcement to coordinate the busy traffic at peak hours… No wonder urban transformation is generally met with scepticism. Let’s see if Prefigurations can convince us otherwise.

Directions are displayed on a construction barrier in front of the office building at number 34. They signal the exhibition’s location and invite visitors to enter the revolving doors that lead past an empty lobby to the elevator. Stairs are typically hidden in such hyper-functional corporate architecture. Whereas the building’s structure dates from the 1960s, the interior and façade were fully refurbished in the early 1990s. Fitted with so-called floor and ceiling systems concealing its technical components, it is also equipped with a fully automated climate control system, which according to the new occupants appears to be rather out of control today. The austerity fades, however, once upstairs. The exhibition is on the first floor. Twice a week an exhibition guide will welcome you and take you through the show.

Thirty-nine architecture and landscape projects are on display. About two-thirds of these were selected following a call for projects, while the others were added to complete the curatorial narrative. The selection committee, composed of external and internal collaborators of AWB, explicitly sought “projects that already contain the seeds for a sustainable and inclusive future”, thus concrete projects that have already been implemented or at least whose feasibility has been tested. The projects are all situated in the Eurodelta (Belgium, the Netherlands, northern France, western Germany) for consistency in the social and spatial challenges they face. And they each fit one of the ten thematic ‘Future Places’ on the agenda of The Great Transformation, which also structures the exhibition. The aim is to address change at a local scale, yet it is also about connection and impact beyond individual sites.

The first stop is ‘Circular Material Hubs’. It groups the recycling park Recypark (designed by 51N4E), which is under construction in Anderlecht, the wood processing factory LAB15 (designed by GAFPA, Lab15), and the materials reception centre Van Hoorebeke Timber (designed by TRANS architectuur stedenbouw, UTIL Struktuurstudies, Studiebureau Boydens), both completed in Ghent. Together they prefigure how the spaces for collecting, recycling and producing materials can combine new industrial typologies, quality architecture and additional public functions such as green spaces or a skate park. The individual projects do not pretend to solve it all. Their aspiration also makes them particularly vulnerable to criticism. The exhibition guide who shows us around draws to our attention how they in some cases still participate in the logistics of what are still massively polluting multinational networks. The exhibition, however, seeks to highlight the qualities of each realization so as to inspire new projects and collaborations that could perhaps overcome such flaws in the future.

The exhibition also points to the need for a new architectural language, not so much considering the projects’ final appearance but rather in the way they are communicated. Glossy renderings of polished spaces deprived of people are the exception here. Instead, you will find plans, models, extended dossiers and colourful pictures, technical drawings, diagrams, and annotated working documents, as well as a few peculiar objects – a religious icon, a jar filled with earth, a large wax-lined canvas. Moving on to the items presented in ‘Energy Districts’. If the photograph showing the façade of the residential tower under construction for De Nieuwe Dokken in Ghent (designed by Stéphane Beel Architects, BLAF architecten, DENV!-studio, ONIX, RONT, Pauwels, ELD, ANTENA, DUCoop, sogent) does not completely convince, the attention is directed towards the underlying cooperative that offers an energy infrastructure with a closed circuit for heat, water and waste for the benefit of the individual new owners who automatically become shareholders in it upon purchase of their propriety. This procedure is illustrated by a copy of the cooperative’s subscription form. Further on, a bright statue of Saint Cornelius draws us towards the assemblage of ‘Community Engines’. It belongs to the Church of St Cornelius in Aalbeke (Kortrijk). Following a participatory process, the church is now being refurbished as part of a masterplan. The design (by urbain architectencollectief, Slieghem & Partners, Tech 3, De Fonseca, Feys BV) combines a liturgical space with a music school and library. It seeks to preserve traditional practices and symbolic heritage by connecting them with use by a new generation, thus encouraging the creation of new meaning within the community in the future.

Since the exhibition can rely only on fragments to make complex arrangements visible, the layered connections within and between projects are sometimes hard to follow. However, to overcome this recurring struggle one encounters in architecture exhibitions, the curatorial team doubled the narrative by means of exhibition texts. Besides the classic project descriptions, multiple voices accompany the visitor through the show. Every theme is narrated by a different imaginary person making up the “10 Tales on Transformation” transcribed in the exhibition leaflet: It was a contractor who took us along the projects in the ‘Circular Material Hubs’ as he carries out his everyday duties. In ‘Caring Neighbourhoods’, a girl visits her grandmother in a care home (Huis Perrekes, Oosterlo, designed by NU architectuuratelier), before taking her for a walk past historic villas converted into a care campus (Zorgbuurt De Korenbloem, Kortrijk, designed by Sergison Bates Architects, Studio Jan Vermeulen, Tom Thys Architectuen, Buro Groen).
Later, we learn about ‘Learning and Making Hubs’ from the perspective of a start-up founder, about ‘Food Lands’ from a farmer, and about ‘Affordable Dwellings’ from a municipal housing policy administrator. The fictional characters succeed in bringing us closer to the topics. For a moment one can feel suspended in this alternated, absolutely idealized, though strangely familiar reality. In case one doubts whether these tales could become true, the show ends with an additional set of video portraits. These are ‘real’ people interviewed by Mieke Debruyne, each endorsing the role of an enabler in their own specific context. This could be your neighbour, your aunt, your community representative… you?

There is, however, also something ghostly to the show. Empty tables and wall space suggest the exhibition room can be used and activated as a workspace. Public debates, workshops and school visits have sparked lively and necessary conversations about the projects in the show. But the scenography does not use materials of a typical classroom, cultural hub or corporate office. The architect Laura Muyldermans and artist Bas van den Hout created a rough yet delicate interior made of OSB panels, layered cardboard and whitewashed paper sheets. The different objects and documents are positioned in indentations in the surface of presentation socles. Several of these indentations offer places to sit for visitors. These spots evoke traces of someone who was there and left.
Could it be the wandering ghost of Modernism? Or rather the spectre of future promise? Such a disconcerting presence was conjured by Jesse van Winden (curator & cultural coordinator, part of the Meyboom artist-run spaces) during his introductory speech to an exhibition organized last June on the building’s ground floor. Between Prefigurations’ display boxes mounted in the window frames, one can observe Boulevard Pacheco’s desolate surroundings. Neither the neighbourhood nor the office building are cited in the show. One is left wondering what will happen to this place. Could we have a conversation about this too? The latest renderings seen in the press material for the area’s future transformation led by real estate developers do not augur well. And yet, a creative and determined ecosystem is breeding here. Beyond the stimulating temporary initiatives, one can only hope its members will find a way to stay and thrive.

Alice Haddad is a PhD candidate at the Department of Architecture and Urban Planning, Ghent University. Her research focuses on architecture exhibitions as vehicles for spatial culture and territorial imaginaries in Flanders. She has contributed to curatorial, editorial and artistic projects. 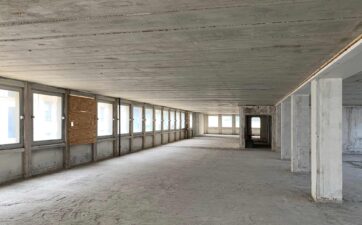 Architecture as facade or as support system 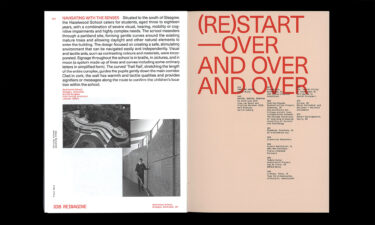 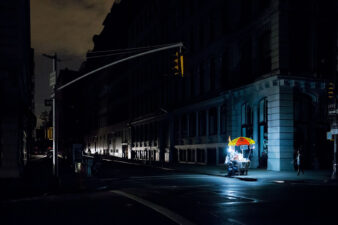