Architecture Out of Bed: A review of the 10th International Architecture Biennale Rotterdam

We hear it all the time: Architecture can do a lot. It’s all about life-changing designs, dreamy projects that look beyond the discernible future and tackle global issues. In fact, once architecture wakes up, stops bickering, and gets out of bed, it’s going to solve a long list of problems. One of them is the climate crisis, which was the subject of the recent International Architecture Biennale Rotterdam. And as the title of its tenth iteration stated: IT’S ABOUT TIME: The Architecture of Change. Rightly so, because it turns out we have been hitting the snooze button for about 50 years!

Over the years the IABR has become a beloved institution in its home town of Rotterdam. It has slowly established itself as a major event for the active players on the wider architectural scene: architects, landscapists, urbanists, planners, as well as a wide-ranging audience of prospective clients and administrative stakeholders. It is the place to be for the hopefuls among design professionals, and along with the Architecture Film Festival Rotterdam and Rotterdam Architecture Month it is doing the heavy lifting for the reputation of Rotterdam as the city of architects.[1] And after previous editions, with titles like Open City Designing Coexistence, and The Next Economy, it was here once again to remind us of the challenges ahead.

[1] Even if this reputation is sometimes at their own expense. The joke on the street is that Rotterdam architects are making movies instead of buildings! Which, if not actually factual or funny, is at least indicative of the artistic and public relations niche that Rotterdam practitioners occupy in the eyes of non-local peers.

Housed in a gasometer in the re-emerging district of Rotterdam West, the IABR main exhibition hall featured a central exhibit of an extended wall called the ‘Timeline’. This 50- year retrospective featured famous statements, warnings, commitments and promises concerning the environmental crisis, including the 1972 Club of Rome report, the 2015 Paris Agreement, the Whole Earth Catalog, the ‘Only one Earth’ UN Conference, as well as quotes by beloved and certainly a few not-so-beloved public figures like Greta Thunberg, Jane Godall, Angela Merkel, Ronald Reagan, Margaret Thatcher and George W. Bush.[2] Popular culture and historic mementos in the form of magazine covers and environmentally-minded films complete the serpentine exhibit.

[2] Concerning those last three, whom I never considered remotely as icons of climate change, has anyone considered calculating the CO2 footprint of actual bombs? Since we are obviously not going to save the climate, let’s at least emission-shame some warmongers! Anyone on for co-writing a grant application to the NWO? But imperialist wars aside (oh well), the issue of capitalist growth didn’t get much traction at IABR. Degrowth economic theory runs diametrically counter to all capitalist incentives, and architecture has no vision in that direction either. Can we get Koolhaas to write an LMSXS book please?

While the Timeline, based on Jaap Tielbele’s article Over de grenzen aan de groei (De Groene, 16 February 2022) set the theme, the main part of the exhibition started right behind the partition walls with various projects selected by the curators and categorized under three labels – Ancestor, Accelerator and Activist projects – depending on their look into the distant or imminent future. Here, things got even wilder than they did in the Timeline. There were projects about brick construction methods (Anupama Kundoo et al.), a proposal for a linear park that runs around the whole globe! (Richard Weller), a future meat production facility project (2050+), new solar panels that come in different colours (Marco Vermeulen), an exhibit of 199 patents for sustainable construction solutions collated densely like street poster advertising (MLA+), a gallery of comparative drawings of 33 historic houses and their carbon footprint (Rizzotti Architecte & ETH Zürich), as well as projects of simple unadorned scientific takes (see here the Sponge City Project of Turenscape).

Admittedly, these content-dense exhibits took hours to go through. And that’s when you realized that the Biennale indeed went international! There was a special feature on Luxembourgish, Belgian and French projects presented in a section called the ‘Transition Arena’, which surrounded an auditorium where discussions and other events were regularly hosted. Since these talks were followed by drinks receptions, yours truly also managed to partake in a policy-making get-together despite lacking the proper name tag or policy-making attire.
Once you think this is it, the exhibition revealed a whole new dimension with the massive ‘Ministerie van Maak’[3] section. A hundred, yes, a hundred, 1-x-1-metre models of housing project proposals that address the housing crisis currently faced by the Netherlands. Another amazing section in which I admit my attention span had reached its limits, because I undeservedly sped through it.

[3] The name is a tongue-in-cheek nod to the mishandling of the housing crisis by the Dutch government’s six ministries, and not by any means an actual ministry.

Beyond the theme and content of the tenth IABR, one dimension was even more important: its emotional evocation. The aesthetics of the exhibition, with industrial and Do-It-Yourself connotations, accentuated by eye-popping yellow graphic design similar to a construction site, fit well with the gasometer setting and its surroundings.[4]  Smartly, it was also an economic choice according to curator Peter Veenstra. In any case, it seemed to reverberate with the architecture crowd of Rotterdam who filled the gasometer for the opening event on 22 September. The excitement was also boosted by pop-up bars and two music sets: a walking band that swivelled around the Timeline walls, and the very hipster improv synth band WLDRF, which, by the way, dropped some funny rhymes about architects’ work-life in Rotterdam.[5]

As for the exhibits themselves, they swayed from optimism to pessimism like any self-respecting exhibition on sustainability, with anger and anxiety following close behind. The participants’ names Extinction Rebellion and Encore Heureux speak for themselves. These exhibits, along with the classic metaphor of an hourglass sculpture by the architecture office Monadnock and a clock stuck at ‘five minutes before midnight’ by artist Joep van Lieshout, gave the impression of a rebellious and polemical architectural scene. Which, to be honest, is not really true and can only leave us with a bland aftertaste.

That brings me to the intentions of the IABR. Regardless of the opinions of the participating architects and curators and their desire to save the environment, our role in the system is very much against it. Rotterdam is undergoing a construction spike of vertiginous high-cost and high-maintenance skyscrapers, enabled and designed by architects. Moreover, some 40% of CO2 emissions and 45% of energy consumption are related to construction (Onat et al., 2020). Only limited change is foreseeable, even though this is one of the richest countries in the world. Yes, the tenth  IABR exhibition is democratic and politically less neutral than its previous iterations. But crushed between a construction industry addicted to massive cement intakes, and a real estate market reliant on ballooning square footages and prices, architecture has its hands tied.
Pretending that we are doing something when in reality we are not reveals a new facet of architecture: public relations tactics and communication strategies disguised as politics. And judging by the architectural production of the 21st century, capitalizing on communication and shock value is indeed becoming our expertise. Is architecture turning into an industry of managing our feelings and patting ourselves on the back? Will the next deals for Dubai-like projects in Rotterdam be struck with Greenpeace posters in the background declaring that there is ‘No Time to Waste’?

It goes without saying that in terms of actually taking action against climate extinction, architecture is still only getting out of bed. That has been the case for the past fifty years. Once all the talking is done, the starry projects hatched, and the politics settled, let’s hope there will still be ground to stand on.

Phoebus Ilias Panigyrakis, PhD, is an architect and academic based in Rotterdam. He teaches history and sustainability at TU Delft and HZ University of Applied Sciences.

IABR IT’S ABOUT TIME: The Architecture of Change, from 22 September – 13 November at Ferro, Rotterdam. 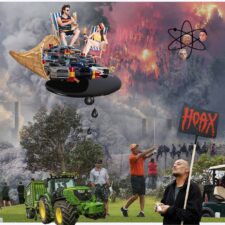 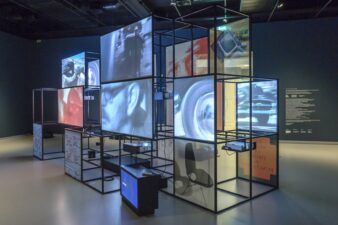 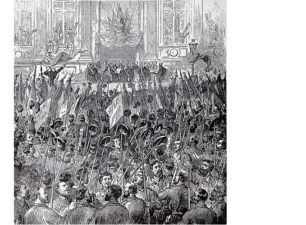